Joy Sterling represents the second generation at Iron Horse. She is the CEO of the winery, a member of the California State Food & Agriculture Board, appointed by Governor Jerry Brown, and Chair of the California Democratic Party Rural Caucus. 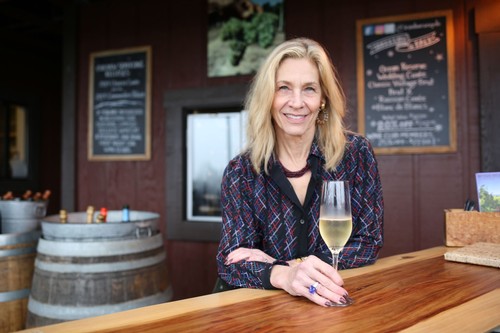 There is a strong French influence in Joy's life. She grew up in Paris, attended a French school and speaks fluent French. Living in Europe and traveling extensively, Joy received an extraordinary education in the appreciation of food and wine.

Joy returned to the United States to attend Yale University where she studied history and economics. She went into journalism. At 29, Joy was Deputy Bureau Chief for ABC Network News in Los Angeles.

In 1985, Joy left ABC's hierarchy to join her family's business and made news headlines for the winery with her first achievement at Iron Horse: In November, 1985, the White House selected Iron Horse Sparkling Wine for Ronald Reagan's toast to peace at the first summit meeting with Mikhail Gorbachev in Geneva.

Joy quietly took up the reins as CEO at the start of 2006 after 20 years presenting the wines across the country, from La Mer at the Halekulani in Honolulu to the Four Seasons in New York. One of her major initiatives is a special cuvee called Ocean Reserve created in partnership with National Geographic. $4, per bottle sold, goes to help establish marine protected areas and support sustainable fishing around the globe.

She is an adventurer and world traveler - having climbed Mt. Kilimanjaro, run white water rapids on the Bio - Bio River in Chile and the upper reaches of the Yank Sing River in China, trekked in Tibet and Bhutan, traveled to Timbuktu for the Festival in the Desert, currently on hiatus because of unrest in Mali. She witnessed the Monarch migration in Michoacán, Mexico and hiked in the Impenetrable Forest of Uganda to see the Mountain Gorillas.

Joy served on the Board of Trustees of the Leakey Foundation for ten years and is a member of National Geographic’s Grosvenor Council. She is the author of A Cultivated Life, published by Random House.

As Chair of the California Democratic Party Rural Caucus, her passion projects include expanding broadband into rural communities and ensuring all Californians have access to clean, reliable drinking water.