The Business of California Bubbly

Wine is fashion in many ways. There are clear trends.

Right now, bubbles are “in”. And we are enjoying every minute of it!

According to Tim Fish in the upcoming June 15 issue of Wine Spectator:

“This is an exciting moment for California bubbly. Sales have jumped in recent years, and the state's producers continue to push the envelope on quality, developing new niche bottlings while preserving their reputation for value.” 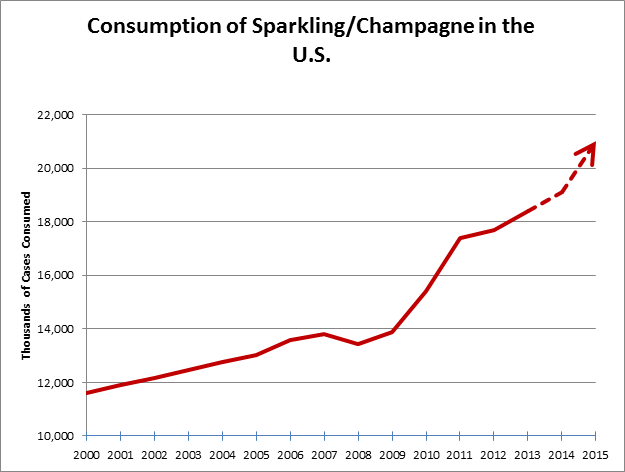 The consumption figures above from the California Wine Institute are are real through 2013. We then continued upward with our  “expert extrapolation” that we will cross the 20,000,000 case mark this year.

For a comprehensive study on the rise of bubbles, I recommend reading: Corks Popping as Sparkling Wines Sales Surge

This surge has several contributors. One is Prosecco. For many, that fruity, user-friendly Italian wine is a gateway to more complex bubbles.

Another is the mass appreciation for handcrafted, small batch drinks across the board in categories like wine, beer, cider, and spirits. Two representative examples are limited edition Iron Horse cuvees: 2010 Summit Cuvee & 2010 Rainbow Cuvee.

Summit Cuvee commemorates the unprecedented free-climb of the Dawn Wall of El Capitan in Yosemite National Park, California - the realization of a dream and an inspiration.  Only 300 cases have been produced.

Rainbow Cuvee celebrates marriage equality. This is our second vintage of this special, small production bubbly. We are very proud that the inaugural release was served at the White House LGBT reception last June. Total production is just 250 cases.

Rosés are a special niche. Ours is very striking, both in color and taste. It’s a dark rose, bottled in clear glass. Originally awarded 93 points by Robert Parker, the 2007 vintage now has six plus years less aging. The most recent disgorging  is 5/4/15.

Serious fans increasingly call for ultra brut or no dosage, like our Brut X, which is a 500 case production.

Most exciting to me is the breadth of interesting bubblies today. Not just Grande Marques, and even beyond Grower Champagne, the next “big thing”, according to Wine & Spirits Magazine is “Somm Sparklings.”

Wine & Spirit’s Associate Publisher Samantha Groseth has this to say on the topic:

“Some of the most interesting intelligence we gather from our Annual Restaurant Poll comes in the wines that most excite sommeliers. In 2015, we heard a lot of chatter about sparkling wine, and not just grower Champagne — sparkling wine is on the minds’ of America’s sommeliers, whether it’s from the Loire, California, Finger Lakes, Italy or Jura.”

Iron Horse was included in this category at the debut Somm Sparkling Table at Wine & Spirits’ annual Top of the List Tasting. A true honor. There were about a dozen to taste, right next to the Grand Central Oyster Bar station - Herman Wiener Blanc de Blancs no dosage, from the Finger Lakes, which is poured by the glass at NoMad, Gruet from New Mexico, Raventos, Domaines de la Berjorie and Baumard, both cremants de Loire, Murgo Etna Rosso, from Sicily, that was very unusual, Banfi, La Marca Prosecco and La Spinetta Moscato d’Asti.

It was Iron Horse and Roederer Estate from California. Ours was certainly the most fun table at the tasting. 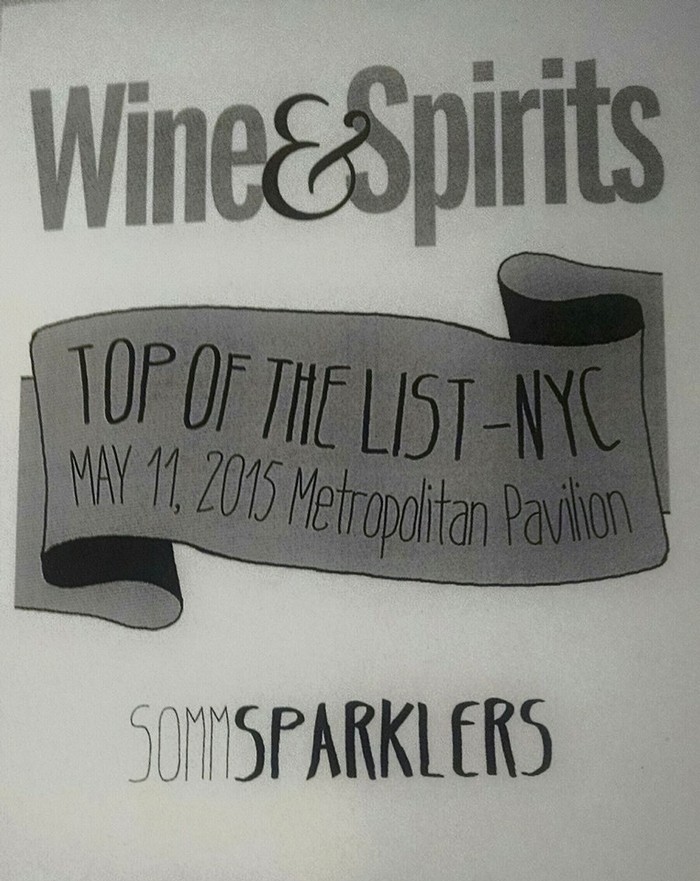 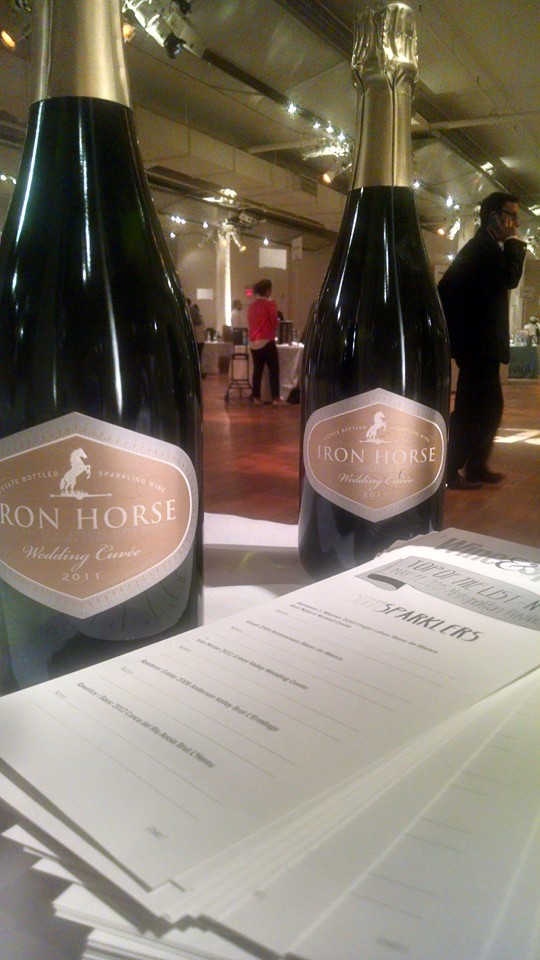 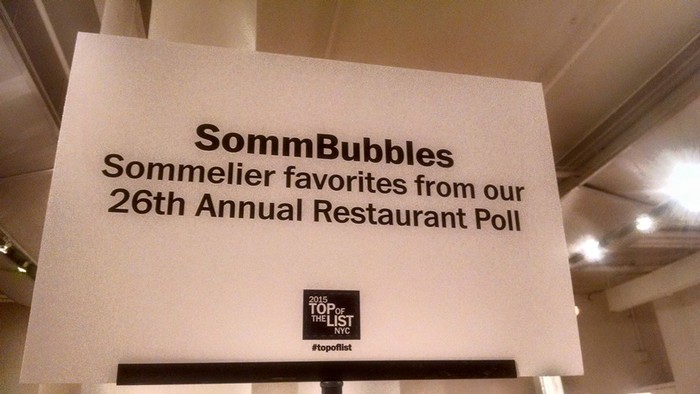 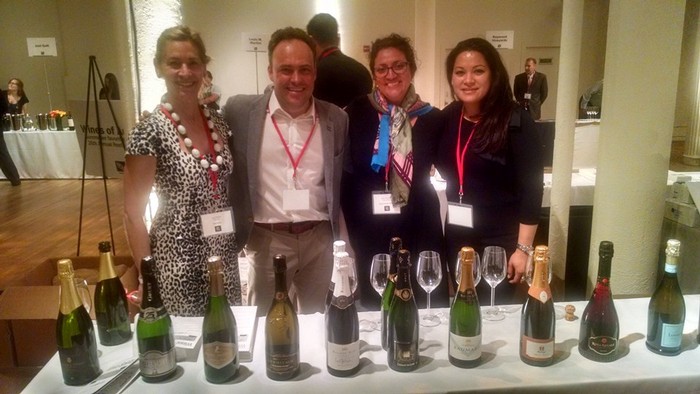 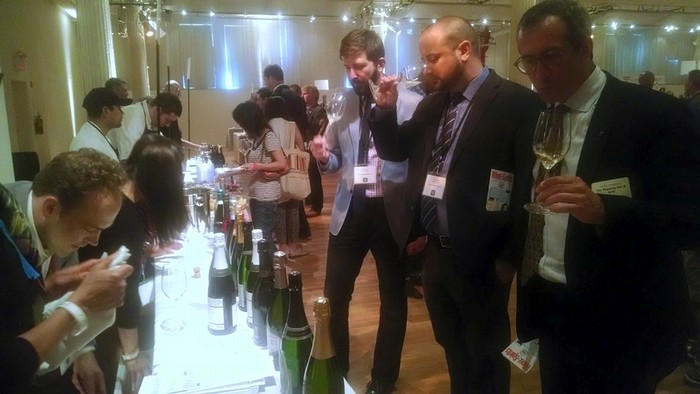 Going back to Tim Fish’s article in Spectator, Tim makes the point that the bubbly business is increasingly year-round:

“Many people think of bubbly in connection to Christmas and New Year's Eve, but it's also enjoyable as a summer drink. Sparkling wine has always been about summer for me.”

My family and I are very proud that Iron Horse ranks among Tim’s personal favorites on his blog.

More and more people now think about bubbly as a wine … to be enjoyed year round with food. As we like to say here at Iron Horse: #notjustforbreakfastanymore.

Kayla
@ Jun 2, 2015 at 11:50 AM
http://www.labellebarrelthief.com
I love your blog on sparkling wine! As a bubbly enthusiast myself I really appreciate the effort you put into writing this yourself and producing the kind of thought-provoking information you provide. I hope you'll be attending the wine bloggers conference this August!

Iron Horse
@ Jul 21, 2015 at 5:37 PM
So glad you enjoyed reading this. What other topics are you interested in reading about on our blog? And yes - that conference sounds very interesting - thank you for the info!