State of the Winery

Governor Brown's State of the State and the President's State of the Union have inspired me to write a state of the winery report. The traditional format is an enumeration of accomplishments from the past year, followed by a vision for the year ahead.

Iron Horse has much to be proud of:

Our newly replanted vineyards are now in their "seventh leaf" and yielding the rewards of the extraordinary investment we have made in the vineyards, replanting 80 of 160 acres since 2005. That's almost the entire original vineyard planted in 1970 and 71. My brother Laurence Sterling, our winemaker David Munksgard and viticulturalist Daniel Roberts are doing a fantastic job.

Naturally, the heightened viticultural knowledge we have today has raised the quality of our wines exponentially, making the accolades of 2013 all the more gratifying.

Our ratings were higher and more consistent, especially on the bubbles. Not that we live or die by scores, but we feel the effect of going up two or three notches. We sold the entire 2009 vintage of Wedding Cuvee in six months and have started shipping 2010, maybe because of the 93 point rating in Wine Spectator with Tim Fish's comment that it was "built for a party." Robert Parker awarded our 2007 Brut Rose 93 points. Wine Enthusiast rated 2004 Brut LD 94 points and named it one of the Top 100 Wines of the Year. Wine & Spirits named Iron Horse one of the Top 100 Wineries of the Year.

The photograph they ran in their December issue speaks volumes. I salute the vineyard team and the winemaking crew and thank our media friends.

We were honored that Iron Horse was served at the dinner hosted by President Obama for China's President Xi Jinping in Southern California last June, continuing a tradition of the White House choosing Iron Horse for five consecutive Presidential Administrations beginning with the Reagan-Gorbachev Summit Meetings. Amazingly, we will be celebrating the 30th anniversary of that milestone in November 2015.

Perhaps most exciting is the evolution of my niece Barrie Sterling's role at Iron Horse. I think she is doing everything right - spending time in the vineyards and out in the market selling wine. She hosts V.I.P tours of the winery, does the chalk board art for the Tasting Room and is working with her grandfather and name sake Barry Sterling on the vegetable garden. Several years ago, my New Year Resolution was to figure out how to be in two places at once. And now I have. 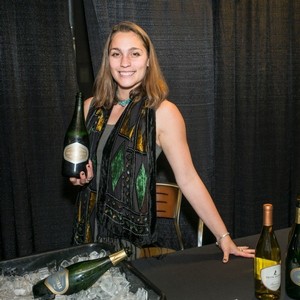 My forecast for 2014 is for some very exciting highs as well as some very tough challenges.

First is the release of our 2012 Estate Pinot Noir. This is the first time in five years that we have had any Pinot Noir to really sell, after a massive replant of the original vineyards (due to old age).

In many ways, this can be seen as a new launch. We are so lucky to get back in with such a spectacular vintage. The category is vibrant. Green Valley is the most sought after area of the Russian River for Pinot Noir today. We finally have ample supply, which will be the new norm for Iron Horse.

I can't wait for you to taste it. It has a beautiful bouquet. The mouth-feel is ripe and opulent. It changes by the minute in the glass. It is young, of course, but it is like a genie that jumps out of the bottle saying, "I am 2012. Drink me!"

Now, when you come taste with us at the winery, we have an entire flight devoted to Pinot Noir for you to try. 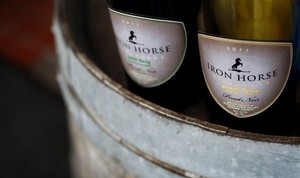 The biggest challenge is drought. This is a problem we share with all Californians. We are all in this together.

Fortunately, our reservoir is two-thirds full, thanks to my parents' foresight to build the reservoir in 1976 and thanks to my brother's contract for re-cycled water from Forestville, which he initiated in 1990.

We are anticipating an early spring. We have Daphne in bloom, quince, star magnolia in full flower, even daffodils starting to open up. It will hit 72 degrees today. Strangely the drier it is, the colder the lows. We have frost almost every morning.

Laurence is trying to time the pruning in the vineyards accordingly and we are saving every drop of water we can for frost protection.

Come what may, the Iron Horse family is working very hard and doing some really great work. How perfect that Chinese New Year January 31 starts the Year of the Horse. We plan on celebrating all year long and hope you will join us in toasting every opportunity.