An Exploration of Tiny Bubbles: The Science Behind Nature’s Magic

Bubbles in Sparkling Wine are not just pretty, little nothings.  They work harder than you think.

For one thing, they are not empty. The bubbles deliver hundreds of molecules to the top of the glass.  When they explode on the surface, they deliver the aromas & flavors which make top quality Sparkling a truly delicious wine.

Creating bubbles is the littlest trick of nature. This begins at Iron Horse Vineyards by hand harvesting the fruit, gently pressing the grapes. We then ferment the juice completely dry, making a gorgeous blend and ultimately bottle it as a low alcohol base wine … adding a precise amount of sugar and yeast.

The sugar triggers the secondary fermentation, bumping up the alcohol by about a point. One of the natural by-products of fermentation is the creation of carbon dioxide (Co2), which normally escapes from the barrel or the tank, but for bubbly we trap it in the bottle with a crown cap, forcing the gas to dissolve into the wine creating … ta da … bubbles.

More than 600 chemical compounds join the carbon dioxide - each lending its own unique aroma and flavor quality.

The magic is in how long we age the wine on the yeast in the bottle. The longer we age it en tirage, the smaller the bubbles and the greater the finesse on the wine.

A perfect example is our 2000 Brut LD, aged for 14 years and disgorged just last month.

The yeast cells feed on the nutrients in the wine. As they become saturated, they start to die off giving back to the wine a rich, creamy texture through a chemical progress (autolysis), much like stirring the lees of Chardonnay in the barrel.

You can see the difference just holding the glass to the light. Big bubbles are called “frog's eyes”. Not a compliment!

You can also feel the difference. The longer the wine is aged on the yeast, the more integrated the bubbles, the smoother the texture, the more elegant the “mouth feel.”

As the yeast cells break down, they emit amino or fatty acids that coat the bubbles, so that when they launch off the bottom of your glass, they don’t glom together. Instead they stay separate and travel up to the surface in streams of tiny, diffuse, gas-filled spheres.

As the bubbles ascend the length of a glass in tiny trails, they drag along the molecules of aroma and flavors which explode out of the surface.

When they burst, they release enough energy to create tiny auditory shock waves; the fizzing sound is a chorus of hundreds of individual bubbles bursting every second.

With each sip, the bubbles excite special receptors on the tongue contributing to that tingling feeling that makes bubbly so seductive.

The bubbles also serve to retain the acidity of the wine. A flat bottle will taste too sweet and out of balance.

The collapse of bubbles at the surface is even more exciting under a microscope.

According to Gerard Liger-Belair, a physicist at the University of Reims in Champagne (of course), bubbles collapsing close to each other produce unexpected lovely flower-shaped structures unfortunately completely invisible to the naked eye.

“This is a fantastic example of the beauty hidden right under our nose.” (Source: Uncorked: The Science of Champagne, published by Princeton University Press.)

British physicist, oceanographer and Champagne aficionado Helen Czerski, explains that bubble dynamics of Sparkling Wine are the same as in the ocean, but with greater consequence. Bubbly can change our mood, but the bubbles in the ocean affect climate. 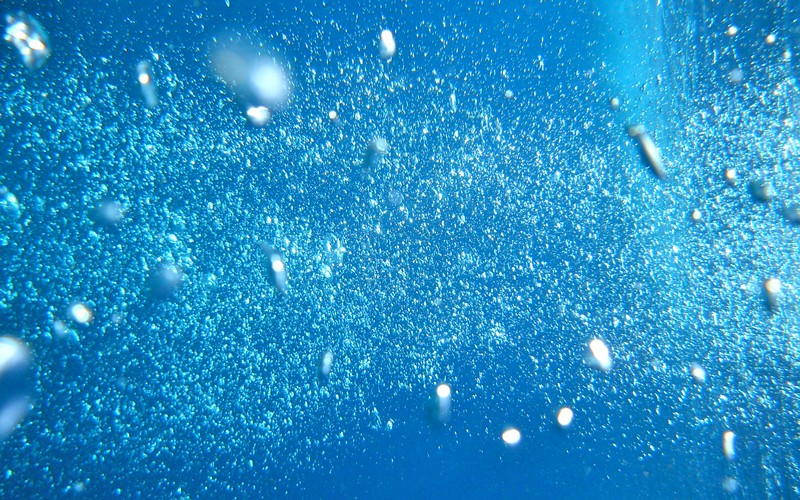 "Bubbles are little packets of gases that rise or fall as if they're on little conveyor belts," she  says. They carry carbon dioxide and oxygen from the atmosphere down into the ocean, and then when they go back up again they pop and sulfur compounds from marine plants are sent upward, forming particles in the air that lead to the formation of clouds."

Czerski is studying how to detect and count ocean bubbles of different sizes to help scientists in other disciplines create more accurate models. She said that scientists have found it difficult to judge the effect of bubbles on their data for years and usually have had to add a "fudge factor" to account for them.

"For instance, bubbles ring like bells when they are formed or when sound waves go past them, and if you're studying sounds traveling through the ocean -- like sounds from whales or sonar -- bubbles can get in the way of what you're trying to listen for,"

And she adds, “A good way of getting people to enjoy my lectures on bubbles is to give them a glass of Champagne.”

Her favorite “parlor trick” is to drop a few raisins into the fizz. The raisins sink to the bottom of the glass, before being lifted back to the surface by the bubbles, which then burst, sending the raisins back down again.

So, what’s the best way to pour a glass of bubbly and maximize the sensory experience? A study published in the American Chemical Society Journal of Agriculture and Food Chemistry answers that question. Pouring on an angle preserves twice the carbon dioxide bubbles compared to pouring down the middle of the glass.

The old fashioned flat coupe ( like the ones my parents drank from at their wedding) has a very slow bubble engine because the bubbles don't get to rise very far. Flavour is delivered to the air gradually, but escapes from the space above the glass very quickly.

Some sommeliers like to serve champagne in white wine glasses because flutes "stifle the flavour".

The Riedel glassmakers have taken it a step further with their new “Champagne Wine Glass.”  President, CEO, & 11th generation glassmaker Maximilian Riedel says “the larger rim diameter enables the aromas of the Champagne to be released” and complexity to develop.

I had the honor of conducting an impromptu experiment with George Riedel, Maximilian’s father, several years ago in Healdsburg. We tasted Iron Horse vintage Blanc de Blancs side by side in a flute and a Burgundy glass. In the flute, the Bubbly was bright and vibrant. In the other glass, it seemed older, softer.

Next time, I hope to try it in a glass slipper.

מנעול מולטילוק באזור בית שמש
@ Nov 18, 2015 at 1:30 PM
http://www.vestedbb.com/blog/take-a-look-at-this-informative-post-8
I drop a comment when I appreciate a article on a site or I have something to add to the conversation. Usually it is triggered by the fire displayed in the article I read. And on this article Iron Horse Vineyards - Blog - An Exploration of Tiny Bubbles: The Science Behind Nature’s Magic. I was moved enough to post a comment :) I do have a couple of questions for you if you do not mind. Is it only me or does it seem like some of the responses appear like they are coming from brain dead people? :-P And, if you are writing on other social sites, I would like to keep up with you.

Alpaca Fleece
@ Jan 29, 2016 at 9:43 PM
http://www.zjhntyxx.net/comment/html/index.php?page=1&id=18125
Thanks for another magnificent post. Where else may anyone get that kind of info in such a perfect way of writing?

I have a presentation subsequent week, and I'm at the search for such information.

מנעולים לדלתות באזור מודיעין
@ Feb 12, 2016 at 6:57 PM
http://crestgroupug.com/index.php/component/k2/itemlist/user/54605
Write more, thats all I have to say. Literally, it seems as though you relied on the video to make your point. You definitely know what youre talking about, why throw away your intelligence on just posting videos to your weblog when you could be giving us something enlightening to read?

marvel contest of champions generateur
@ Feb 13, 2016 at 10:35 AM
http://contestofchampions.cheatfree.biz
Does your blog have a contact page? I'm having a tough time locating it but, I'd like to send you an email. I've got some suggestions for your blog you might be interested in hearing. Either way, great site and I look forward to seeing it expand over time.

laurehinckel.over-blog.com
@ Feb 18, 2016 at 2:52 PM
http://laurehinckel.over-blog.com/
Appreciating tthe commitment you put into your website andd detailed information you provide. It's good too come across a blog every once in a while that isn't thee same out of datte rehashed information. Excellent read! I've saved your site and I'm including your RSS feeds to my Google account.

angry birds transformers hack free download
@ Feb 21, 2016 at 10:14 AM
http://angrybirdstransformers.cheatfree.net
Thank you for sharing your thoughts. I truly appreciate your efforts and I am waiting for your further post thanks once again.

jual blazer slim fit
@ Feb 24, 2016 at 10:46 AM
http://www.bridecool.com/home.php?mod=space&uid=116135&do=profile&from=space
An impressive share! I have just forwarde this onto a friend who had been conducting a little reseearch oon this. And hee actually ordered mme lunch becausse I discovered it for him... lol. So let me reword this.... Thank YOU for the meal!! But yeah, thanx for spending some time to talk about tbis subject here on your web site.

castle clash triche
@ Feb 27, 2016 at 11:39 AM
http://castleclash.cheatfree.biz
Thanks for finally writing about >Iron Horse Vineyards - Blog - An Exploration of Tiny Bubbles: The Science Behind Nature’s Magic

chair4u
@ Mar 7, 2016 at 4:17 AM
http://www.wedreviews.co.il/provider/stories/258940
Hello! I've been following your site for a long time now and finally got the courage to go ahead and give you a shout out from Atascocita Tx! Just wanted to say keep up the great work!

film o auschwitz birkenau
@ Mar 8, 2016 at 1:28 PM
http://www.trochetechniki.pl/film-o-auschwitz-birkenau,t,9680.html
My brother recommended I might like this website. He was totally right. This put up actually made my day. You cann't believe just how much time I had spent for this information! Thank you!

dragons rise of berk generateur
@ Mar 14, 2016 at 11:46 AM
http://riseofberk.cheatnow.net
Hmm it appears like your blog ate my first comment (it was extremely long) so I guess I'll just sum it up what I submitted and say, I'm thoroughly enjoying your blog. I as well am an aspiring blog writer but I'm still new to the whole thing. Do you have any helpful hints for novice blog writers? I'd certainly appreciate it.

jurassic world triche
@ Mar 14, 2016 at 11:47 AM
http://jurassicworld.cheatfree.net
These are in fact great ideas in regarding blogging. You have touched some fastidious points here. Any way keep up wrinting.
Commenting has been turned off.